Our firm is capable of drating your GTC and/or standard contracts based on your strategy and SWOT, considering all contractual risks which are exist in your field of activity and costomise any customary terms and conditions into your favorable text.

Companies may prepare general terms and conditions for their transaction and make undelying standards for the text of contract towards their contracting party.

1- GTC for Sale of Goods or Services 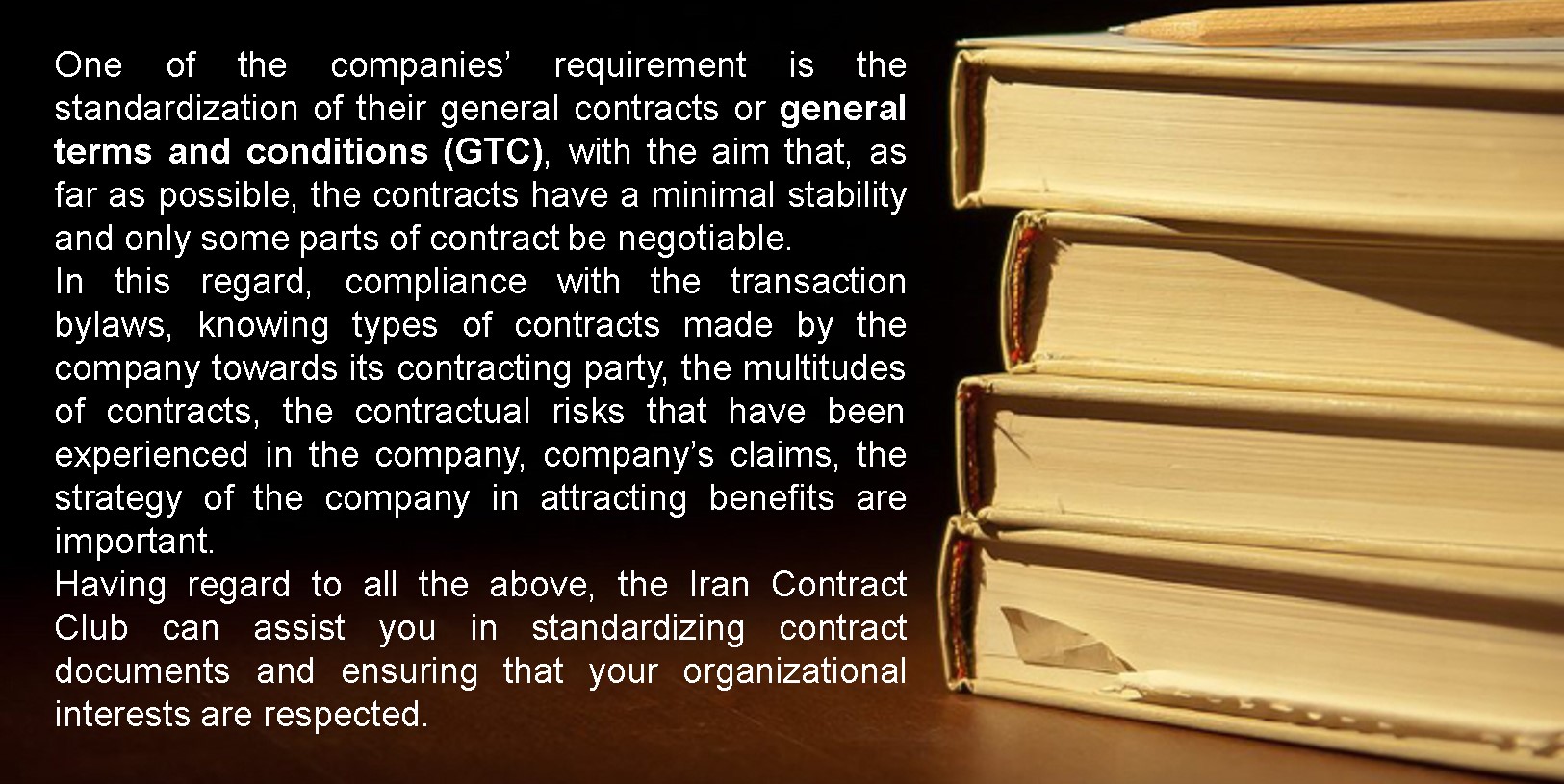 In preparation of the GTC and/or standard contracts the following factors shall be considered:

1- Possiblity of standardization of contract.

2- Adaptibility to the governing laws and regulation.

5- Studies on Lesson Learned (if any).

This General Terms and Conditions (Further to as “GTC”) shall apply to and govern on all agreement made by the Bashgah Misaq Gharadadnevisan Iranian (Further to as “ICB”), unless amended, modified or replaced by the next version of GTC and/or the subsequent signed contract (further to as “Contract”) towards the third party (ies) (Further to as “Client”).

ICB’s obligations shall be effectuated upon the signing date of the Contract.

4-1-The Price shall be subject to the price which may be agreed on in the Contract.
4-2-All the Prices shall be paid against the submission of the proper invoice(s), per month.
4-3-All the arbitration costs shall be subject to the CODAC Arbitration Costs.
4-4- If fulfilment of the Contract requires departure from Tehran or I.R. of Iran, all costs and expenses, including entry visa, trip expenses i.e. air-ticket, meals, and accommodation and etc. shall be paid separately.

5-1- ICB is obliged to timely implement the obligations ordered by the Client, continuously and regularly in accordance with the schedule instructed by the Client each month.
5-2- ICB undertakes to treat all information relating to the Client’s work order (s), as confidential, and to refrain from divulging it.
5-3- Upon request, ICB undertakes to send its representatives to the Client’s office to provide local consulting services.
5-4- ICB shall bring fully to the knowledge of the Client all the contractual concept which imposes the risk on the Client and to obtain the pre-approval of the Client.
5-5- All contract versions must be drafted by the ICB based on the information and documentation provided by the Client.
5-6- ICB is committed to utilize the international standard format(s) for drafting and drawing up the Drafted Contract.
5-7- ICB shall, in all Drafted Contract versions, coordinate fully with the Client in the determination of the arbitrator under the arbitration clause in the Drafted Contract (if applicable).

6-1 The Client shall submit all technical information needed for fulfillment of the Services at the request of the ICB.
6-2- The Client is obligated to remit the Price amount to the account of ICB in due time.

7-1- The Liability of the ICB to the Client is only to defend Client’s legal rights in all tribunals in terms of the ICB’s capability, skills and professional ability, and the decision maker in the case is the competent judicial authority that the ICB does not control. At the preliminary stage of criminal proceedings against the Client, the presence of the representative of the ICB is essential for conducting the investigation. The prosecutor’s judge may also, on his own legal discretion, deny the presence of an attorney during investigations or the statement of the attorney acceptance in the case, and not allowing the defense and examination of the case to the lawyer, which, therewith, would not disrupt the existing mutual contractual relationship and the fulfillment of ICB’s obligations concerning this step, under the Contract.
7-2- Regardless of the strength and weakness of the evidence (s), the result of the proceedings and the length of the trial is not predictable and the court set the appointment of proceeding and the acceptance of the lawyer and the lawsuit or response to the lawsuit against the Client does not mean the issuance of a ruling in favor of the Client and the issuance of a ruling whatever the quality, whether it is in favor of the Client or not, does not affect the amount and payment of the fee related to final judgment defined for that judicial stage. The Client, without the prior approval of the ICB, is not entitled to intervene in the case; otherwise, the ICB's liability will be waived.
7-3- If at each judicial stage, the ICB, by the measures taken pursuant to applicable laws, it is possible to settle the issue through alternative dispute resolutions, then the total fee stipulated in the related Attorney Service Contract shall be paid to the ICB.
7-4- The payment of the costs of the proceedings, including the stamp of the petition, the documentation and the preparation of the transcript, the expert's salary, the travel expenses, and, in principle, all the costs of the proceedings in any case, shall be on the Client’s account and if, due to delay in paying these costs resulted in the damage, ICB has no responsibility. Payment or receipt of any kind of amount by ICB or receipt and delivery of the original documents will be made solely against the receipt.
7-5- ICB disclaims any responsibility for any actions that lead to the interference and comments of the persons irresponsible in the case.
7-6- Client is responsible for the consequences of all the statements, information and claims submitted to the ICB and the court.

7-7- ICB is committed to draft and draw up the Drafted Contract in accordance with applicable standards, in such a way as to preserve the interests of the Client.
7-8- ICB ensures the content of its Drafted Contract and assume liability based on the following terms:
i)    ICB does not have responsibility for the Drafted Contract terms and conditions which are stipulated based on the incorrect, incomplete or inadequate information provided by the Client.
ii)    ICB’s liability under this field shall be effective, only if the contractual negotiation toward the Client’s contracting party has been conducted by the ICB.
iii)    ICB’s surety shall not cover, if any insertion, modification, deletion, and any changes effected on the final version of the Drafted Contract, without the prior approval of the ICB.
iv)    Any correspondence (including the sending of an official or informal message by e-mail, post, fax, and other social networks) toward the contracting party, agreement, adjustment of an addendum or amendment regarding Drafted Contract, without consulting and obtaining the approval of the ICB, causes the ICB to withdraw from the liability.

8-1- The ICB and Client, each, may terminate the Contract with immediate effect by delivering notice of the termination to the other party, 30 days in advance.

Any dispute, controversy, difference or claim arising out of or in connection with this Contract, including but not limited to any question regarding its existence, validity, interpretation, performance, breach or termination thereof or any dispute regarding non-contractual obligations arising out of or relating to it, shall be referred to and  finally resolved by arbitration administered by the Iran Contractual Disputes Arbitration Club (“CODAC”) in accordance with the Arbitration Rules of the CODAC* (“CODAC Rules”) for the time being in force, which rules are deemed to be incorporated by reference in this Clause, when the Complying Request for Arbitration is submitted. The seat of the arbitration shall be Tehran, I. R. of Iran. The number of arbitrators shall be 3 .

This GTC and all agreement concluded between the parties shall be governed by the Iranian laws.

All correspondences and orders sent by the Client to the ICB will be through the following:
[email protected]
Tell: 0920-3529423